I hope this finds you well and that you take the time today to enjoy the sunshine – it may not last! I have been in the Abbey all week and have thoroughly enjoyed being back in my office and seeing some of the L5 pupils who have been in school for some face-to-face time with their teachers.

I am delighted to say that the Abbey gardens are starting to look much better these days – the roses are being pruned and the lawns mowed, but it is still not the same without you young people being there.
There have been sightings of rare birds in the gardens, including a lesser spotted woodpecker, a tree creeper and a beautiful pair of jays. Don’t tell anyone, but I also had to evict a young squirrel from the dining room last week as we had left the pupil entrance door to the garden open. The poor little thing was terrified, but I am pleased to say he was very soon returned safe and sound to the gardens.

As I’ve mentioned in other memos, I have fallen in love again with the great outdoors and, if nothing else, this period of lockdown has really given me the chance to rediscover the beauty that nature holds. On my numerous walks with dear Mr Moore, I have had the pleasure of witnessing the changing seasons in Sutton Park and how, since the first days of lockdown, the foliage and fauna have changed dramatically. From late March to late June, we have been in awe of the beauty and majesty of nature that we have witnessed on our daily walks. Walking in the woods can be extremely therapeutic and calming and hugging trees can be even better! I will definitely never lose my rediscovered love of nature and look forward to continuing my walks through the summer, autumn, and into winter.
Because I love Sutton and its Park so much, I thought I would find out something about its history. Some of the trees, especially the huge oaks, must be ancient and I like to imagine what the people were like who planted them all those centuries ago. 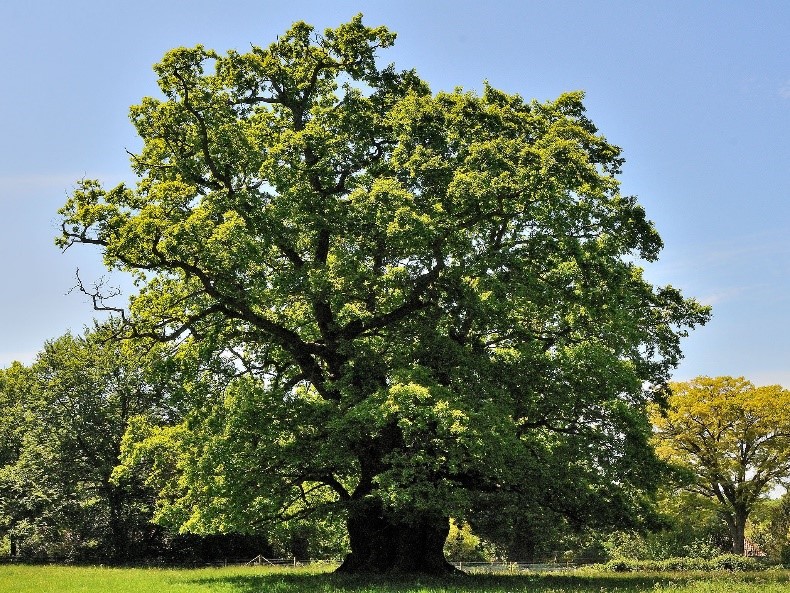 Apparently, we have a lot to thank dear old King Henry VIII for as he is the one who apparently gave the park to the people of Sutton Coldfield. In 1528 it is believed that the famous King bestowed Sutton Park upon the local people. According to the history books, it was Henry’s friend, Bishop John Vesey (of Bishop Vesey’s Grammar School fame), who asked the king for this favour as the town was going through some very hard times and having a huge park filled with wildlife would be a great asset to the townsfolk. Therefore, in 1528, a charter of King Henry VIII gave the town the right to be known as “The Royal Town of Sutton Coldfield” and to be governed by a warden and society.

However, there is also a legend attached to this which proclaims that it was in fact King Henry’s eye for a pretty girl which brought this about – see below: 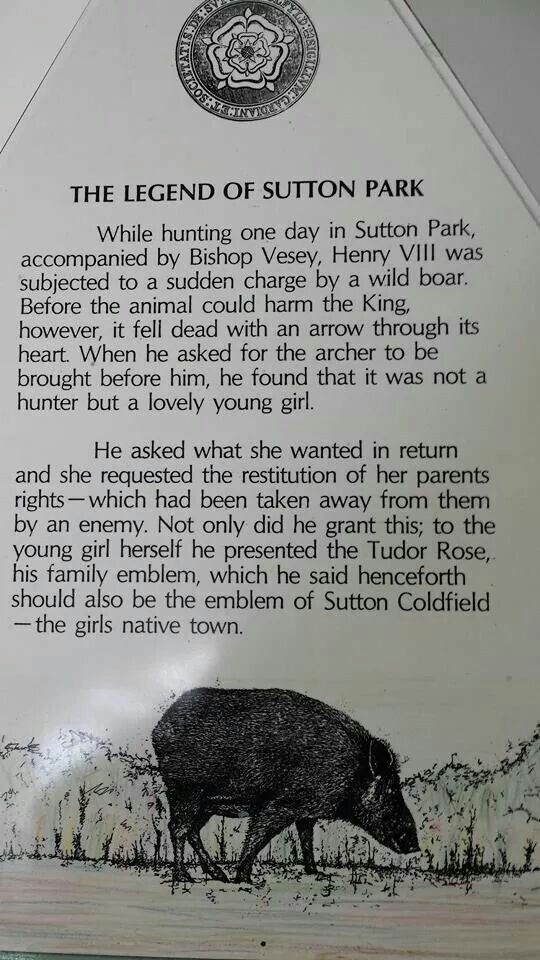 I prefer the above version of events (being an old romantic myself)! What do you think?

There are also references to Sutton Coldfield in the works of William Shakespeare. For example, in Henry IV, Part 1 when Leading his ill-equipped rabble against the rebels, the fat boastful knight Falstaff tells his lieutenant “get thee before to Coventry, fill me a bottle of sack: we’ll to Sutton Co-fil tonight”.
(The etymology (look it up) of the name Sutton appears to be from “South Town”. The name “Sutton Coldfield” appears to come from this time, being the “south town” (i.e. south of Tamworth and/or Lichfield) on the edge of the “col field”. “Col” is usually derived from “charcoal”, charcoal burners presumably being active in the area).
Sack was the fashionable drink of the Tudor gentry (whilst ordinary folk drank ale). It was a sherry-style wine, imported from Spain. The name comes from the French “sec”, meaning dry. It was certainly too dry for Falstaff, who apparently drank it hot, with added sugar (probably why he was such a fat old knight!) The Bottle of Sac public house in Sutton Coldfield takes its name from these words of Falstaff. Don’t forget that Shakespeare’s home in Stratford-upon-Avon is not too far from here so Sutton Coldfield would have probably have been well-known to him.

Unfortunately, they didn’t have cameras in Henry VIII’s day or in Shakespeare’s so I found some old pictures of what Sutton Coldfield used to look like back in the day (No, before you ask, that’s not me in the apron!)

Here are some more modern pics taken in the 1950s/60s – look at the lovely old cars and how peaceful and crowd-free the town looked in those days (No, that’s also not me on the bike in the first picture either!)

I find history so fascinating, don’t you? I always love Miss Watson’s assemblies because she really brings history alive and has such a wonderful memory for dates and events. I love finding out how streets got their names and who might have occupied the old houses near me in the past. My mother used to live in Sutton Coldfield on a road called ‘Kenelm Road’ which is just off Digby Road. I recently discovered that there was a noble man called Sir Kenelm Digby who was, amongst other things, a great naval officer (there was also gossip about him being a pirate!). Kenelm Digby was a friend of the famous Samuel Johnson who published his dictionary entitled A Dictionary of the English Language in 1755. Johnson was born in Lichfield and you can visit a museum there dedicated to his life. Apparently, Johnson wrote a poem about Kenelm – don’t worry, I couldn’t find a copy! In the poem, Johnson draws attention to Digby’s 1628 naval battle against the French which took place off the coast of modern day Turkey. Apparently, Johnson was delighted to note that the battle was won on his birthday, the 11th of June!

Well, it wouldn’t be right if I finished one of my memos without adding a poem, would it? I’ve therefore chosen yet another one of my favourites, called ‘I Remember, I Remember’ by Thomas Hood and it’s about an older man remembering his childhood days. The narrator in the poem is reminiscing about how carefree and happy he was as a boy, when his heart was filled with joy and a love of nature. This poem has always had an effect on me – even when I was a child, but it means so much more to me now that I’m old(er).

‘I Remember, I Remember’ (Thomas Hood)

I remember, I remember,
The house where I was born,
The little window where the sun
Came peeping in at morn;
He never came a wink too soon,
Nor brought too long a day,
But now, I often wish the night
Had borne my breath away!

I remember, I remember,
The roses, red and white,
The vi’lets, and the lily-cups,
Those flowers made of light!
The lilacs where the robin built,
And where my brother set
The laburnum on his birthday,—
The tree is living yet!

I remember, I remember,
Where I was used to swing,
And thought the air must rush as fresh
To swallows on the wing;
My spirit flew in feathers then,
That is so heavy now,
And summer pools could hardly cool
The fever on my brow!

I remember, I remember,
The fir trees dark and high;
I used to think their slender tops
Were close against the sky:
It was a childish ignorance,
But now ’tis little joy
To know I’m farther off from heav’n
Than when I was a boy.

I am planning an assembly for you U5 students – so watch this space as more information will follow shortly via email.

I hope you all have a lovely weekend. Don’t forget to help with those household chores – make your bed, tidy your room and hoover now and again (it’s great exercise!).

Before I forget, I absolutely loved the video some of you made with Miss Cassells in Music to the tune of Radio Gaga about lockdown – Loved the lyrics – well done!

Finally, as always, remember to be kind to others and yourselves. This pandemic has been awful, but it brought with it kindness in abundance – let’s never forget the joy that kindness brings. 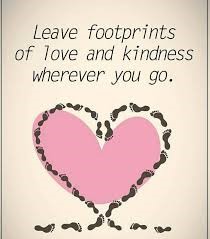 Remember you are special, you are unique, you are loved – pass it on.
Love and best wishes,
Mrs M