Welcome to a brand new week and I hope you all had a lovely weekend. I’m in a wonderful mood this morning because I’m writing this memo in my office at the Abbey as some of the L5 are in school today for some English and Maths lessons.  They are sitting outside in the sunshine as I write in our beautiful – if very overgrown – Abbey gardens and thoroughly enjoying being back at school and seeing some of their friends again.

As you know, Mr Moore and I thoroughly enjoy our long walks in the park and we had quite a long and exciting one on Saturday.  A storm that was threatening for most of the day suddenly erupted just as we paused to gaze at a beautiful rainbow over Little Bracebridge pool.  The rain came down and the thunder rumbled, but there was little sign of any lightning so we decided to carry on with our walk.  I’m so glad that we did, because the woods were even darker and more spectacular than usual and there was a strange stillness in the air as birds fluttered hurriedly back to their nests in anticipation of the storm to come.  Did you know that birds and insects have a sixth sense and know when a storm is on its way? Apparently, even trees are in on the secret because they turn their leaves upside down in an endeavour to protect themselves when storms are on the horizon.

I’ll let you into a little secret, I absolutely love storms – the wilder the better – and have been known to sit in our little garden house watching the dramatic lightning bolts flashing across the sky and listening to the loud bursts of thunder.  Luckily, I’ve never come to any harm and it’s probably much better to watch a storm from inside, but somehow being in that little house with the door open really makes the storm feel so much closer.   During a storm, you also need to make sure that your pets are inside as it’s a well-known fact that cats and dogs are frightened of thunder and lightning – like this poor little puppy is:

A poem about a storm – because I know how you love my poems! 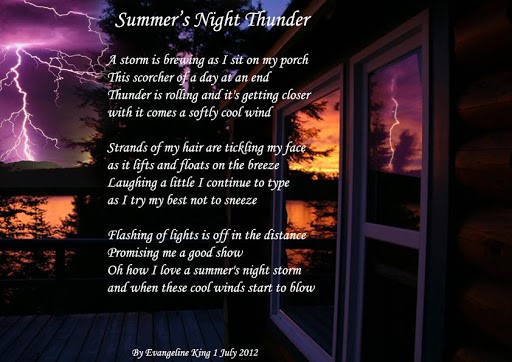 Talking of storms and thunder in particular, when I was younger, I was absolutely fascinated by the Norse gods and heroes and also the myths of ancient Greece and Rome.  One of my favourite Norse gods was (and still is) Thor, the thunder god.  I love the descriptions of how his chariot wheels created thunder as he sped across the stormy skies.  He also possessed a magic hammer called a Mjollnir which is probably his most iconic symbol. His Mjollnir would return to him like a boomerang when he threw it into the sky. Did you know that the English word Thursday is named after the Norse god of thunder, Thor? Thursday means Thor’s day in Old English: Here he is thundering across the skies in his chariot drawn by enchanted goats with the full power of the storm as his backdrop! 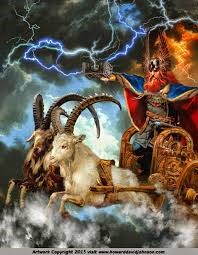 In fact, all the days of the week were named after the heavens or derived from ancient languages such as Latin, Greek, old Norse and Anglo Saxon. Here is the full list, together with their French and German versions (you’re having an MFL lesson at the same time today!):

Monday
From the Old English Monandæg, a combination of mona, meaning “moon”, and dæg, meaning “day.” Most Romance languages use the Latin for “moon” – luna – as in the French lundi and Spanish lunes.

Tuesday
From the Old English Tiwesdæg, meaning “Tyr’s (or Tiw’s/Tew’s Day”), named after the god of war of Norse mythology. Naming the second day of the week after a war god stems from the Romans’ use of Mars for the same day, leading to, among others, the French mardi and Spanish martes.

Wednesday
From the Old English Wodnesdæg, or “Woden’s (Odin’s) Day”, (Odin was Thor’s father), named after an important Norse god. The name of this day, too, is borrowed from the Romans, who used the god Mercury for Wednesday. The French is mercredi and the Spanish is miércoles.

Thursday
From the Old English Þurresdæg, meaning “Thor’s Day” after the Norse god of thunder. The Latin equivalent is named after Jupiter, as in the French jeudi and Spanish jueves.

Friday
From the Old English Frigedæg, named after the Anglo-Saxon goddess Frigg. It is based on the Roman goddess Venus, and used in French as vendredi and in Spanish as viernes.

Saturday
From the Old English Sæterdæg, or “Saturn’s Day,” this is the only day to have retained its Latin origins from the god of agriculture. In French it is samedi and in Spanish, sábado.

Sunday
From the Old English Sunnandæg, the day of the sun. Most Romance languages have used the Latin for “Lord’s Day”, as in the French dimanche and Spanish domingo.

Anyway, I thought I’d let you have a little ancient history lesson today because the storms we had over the weekend brought back memories to me of the Norse gods, especially dear old Thor!

I mentioned in my last memo the fact that people do not seem to be as kind and friendly as they were a few weeks ago before lockdown was eased a little.  This has been particularly obvious from watching the news and seeing all the violent clashes that have been happening over recent days.  However, thankfully, there is still lots of kindness about and I am always very heartened to hear how friends and neighbours continue to rally round and support those less fortunate than themselves. On my walks with Mr Moore, we pass by painted stones with little messages on them written by children and the windows on our local roads are filled with rainbows and messages of support for our wonderful key workers, especially the NHS.  I really and sincerely hope that when this pandemic is over and we are finally able to return to normal, we will remember the kindness that came into our world during this awful crisis; how we learnt to smile at strangers and greet them cheerily; how we connected with our friends and families via zoom or – as you young people have been doing – via House Party; how we shared and cared and became less critical of others.   I know that I will never, ever forget the beauty of nature that I have experienced over these past few months.  I’m almost ashamed to admit this, but up until lockdown, I hardly ever ventured into Sutton Park, preferring instead to shop or travel further afield to other places of interest.  However, even when lockdown ends and the shops, restaurants, cinemas and museums are open again, I know that I will still want to walk through the park to my favourite places in the hope of seeing those elusive deer again or the beautiful heron.  I’ve even turned into somewhat of a train spotter and I get really excited when I hear the whistle of an approaching train and do my best to get to the nearest bridge to watch it rolling by!  Here are a couple of photos I took recently.

The first one, taken by dear Mr Moore, is of me hugging my favourite tree (no, I haven’t gone barmy – apparently hugging a tree can be very therapeutic). The second one was taken by me at sunset as the ponies were grazing near the woods. The ponies are so beautiful aren’t they? 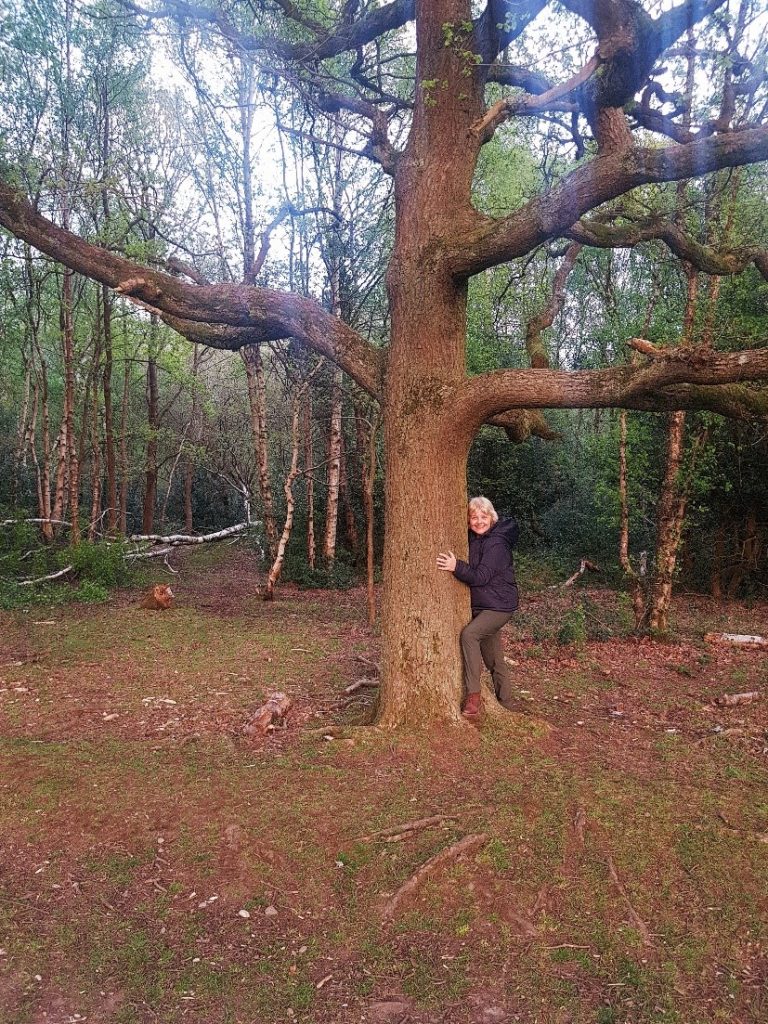 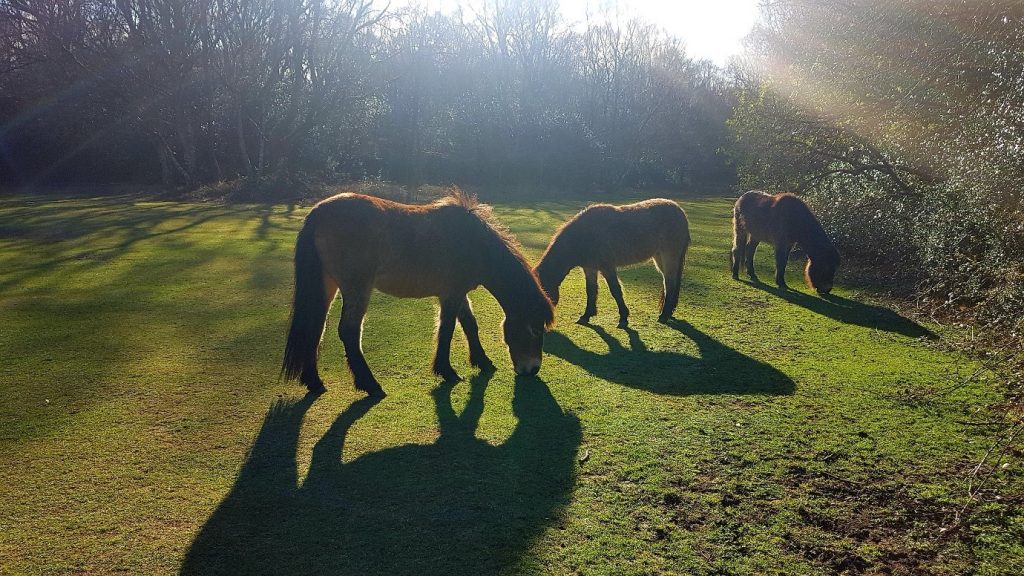 Anyway, I now have pleasure in attaching the House point totals, showing the pupils with the highest number of HPs in each year group: Drum roll, please!

Happy birthday greetings go to Joshua Campbell and Fahtima Zaib who both turn 14 on  17th June.  Have a great day on Wednesday both!

Well, it only remains for me to say, as always, that I am very proud of you all.  You are exceptional young people and I feel absolutely privileged to know you.  It has been so hard for all of us these last few months, but I know it’s been particularly hard for you young ones.  You are missing your friends, missing going to the cinema or having a coffee together.  You may even miss simply being in school together!     However, I hope you know that you can contact me any time – or any of your teachers – if you need to talk to anyone.  We are here for you and will be happy to support you in any way we can.

Finally – going back to storms! 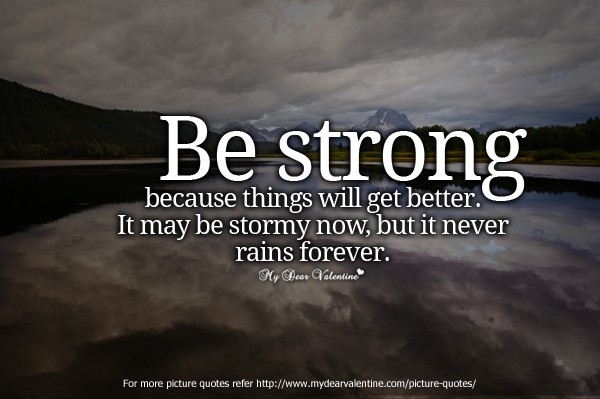 Learn more about our

If you wish to register for an event or have any further questions our admissions team will be happy to help, please contact them on 0121 386 8218, admissions@highclareschool.co.uk or through the contact form below.

We look forward to welcoming you.