I hope this finds you and your families well and that you are all feeling well rested after our lovely, sunny half-term break. The weather has been glorious, but it is such a shame that we can’t be nearer the sea – I always love the seaside on days like these – don’t you? However, the park is a great alternative and Mr Moore and I have obviously been spending as much time as possible traipsing through it over the last few days.
I would like to wish all our Muslim families a belated Eid Mubarak! Mr Moore and I had some lovely (socially distanced of course) chats to families that we encountered in the park last Sunday about their celebrations. They all looked happy to be out in the sunshine enjoying picnics and fun in the park with their loved ones. Unfortunately, the celebrations have not been the same this year as many families have been unable to be together and some have been saddened by the illness or loss of loved ones. My thoughts are with you all and I can only hope that next year’s celebrations will be even more wonderful for you all.

Before I forget – a very happy birthday to Cameron who turns 15 tomorrow, 2nd June and Freya who turns 14 on Friday the 5th! Have a great time both.
Today – June 1st – not only marks our return to school, but is also International Children’s Day. The World Conference for the Well-being of Children in Geneva, Switzerland, proclaimed June 1 to be International Children’s Day in 1925. It is usually marked with speeches on children’s rights and wellbeing, and other events involving or dedicated to children. 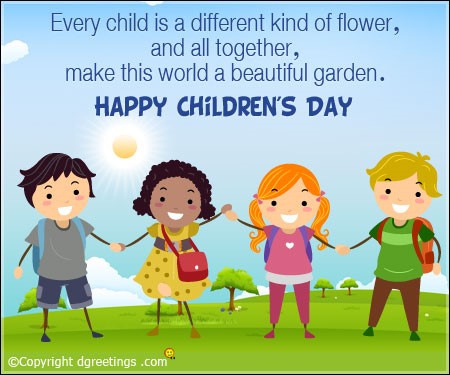 Therefore, children (and young people) – today is your day so I want to focus in this ‘Mrs Moore’s memo’ on you.
As you are no doubt aware, I happen to be extremely fond of children and believe that children’s voices should be heard. Children (as you probably also know) happen to be very wise, intelligent, kind and resilient. I have, therefore, been thinking about all the children I have known in my long years of teaching; all the wonderful children I’ve read about in literature and all the children who gave so much (and still do) to this world we live in.
Throughout history, there have been children who were talented and special. Amadeus Mozart was a child prodigy and is one of my favourite composers. You know how much I love classical music because of the radio in my room that is always on and always tuned to Classic FM. Mozart took up the harpsichord when he was just three years old and composed his first piece of published music at the age of five! Imagine that! Most five-year-old children (including my own at that age) will be tuned into Postman Pat or In the Night Garden! I know my little grandson also loved those programmes when he was five (he is eight now and denies ever having watched them – he’s too cool now!). Anyway, getting back to Mozart. Mozart’s sister, Maria Anna, was also a child prodigy and joined her brother in his travels across Europe where they exhibited their talents in concerts and royal palaces. Unfortunately, Mozart died very young at the age of 35 having composed over 600 pieces of music in his short lifetime. If you get a chance, tune into Classic and listen to some of Mozart’s wonderful music.

Another famous child hailed from Ancient Egypt. Tutankhamen was an Egyptian pharaoh who was thought to have ruled for 10 years in the 14th century BC. King ‘Tut’ became pharaoh at the age of 9 or 10 and, during his reign, he was responsible for restoring the city of Thebes as Egypt’s capital city. Tutankhamen died under mysterious circumstances at the age of 19, but his most important contribution to history would come over 3,200 years later when Howard Carter (a famous Egyptologist) discovered his tomb in the Valley of the Kings in 1922 – one of the greatest ancient and most well-preserved Egyptian burial sites ever discovered. There was a Tutankhamen exhibition on in London last year, which I would love to have visited, but couldn’t get tickets for – perhaps some of you did?

My favourite young monarch in history has to be King Henry VI – he was also the youngest, being only nine months old at the death of his father, Henry V (of Agincourt fame). At the age of only one year old, he began appearing at public functions and took his place in Parliament too. He was apparently knighted at the age of four and at the age of seven, he was crowned in Westminster Abbey. Witnesses tell of how he looked around him ‘sadly’ and ‘wisely’ (bet he would much rather have been watching Spiderman!) Apparently, the crown was too big and heavy for him (surprisingly) and had to be held on each side by two bishops! Poor Henry suffered from bouts of madness during his young adulthood and famously sat under a tree laughing and singing during the battle of St Albans in 1461.

Mary Queen of Scots (of Marie est malade (marmalade) fame) (see earlier memos)) was just 6 days old when she became Queen. However, her mother ruled in her place whilst Mary grew up in France – eventually being crowned Queen of Scots at the age of 18. However, Mary came to a sticky end after being accused of plotting to assassinate Queen Elizabeth 1 and was executed in 1587 at the age of 44.

A more modern child monarch, King Oyo of Uganda, currently holds the record for being the youngest reigning King having been crowned at the age of three in 1995. King Oyo is still king today and has been working closely with the United Nations to decrease the prevalence of disease in Africa. See below – then and now: 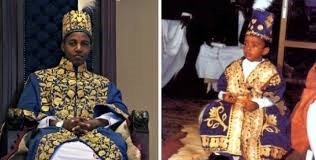 I know we have some budding Mozarts in school, but I am not sure whether we have any future Kings or Queens!
Moving on now from real famous children to fictional ones. As you have probably gathered from my ramblings over these past few months, I happen to love reading and, as a child growing up in the wilds of County Antrim and, later, the wild coasts of Cork and Kerry; I loved nothing better than burying my head in a book. There was not much children’s telly in those days and not many homes, including ours for some time, had access to a telly in any event. So, I read. I read everything I could get my hands on, but in particular, I loved Anne of Green Gables, Pippi Longstocking, and almost anything by Enid Blyton or Charles Dickens. Anne of Green Gables, however, has to be one of my most favourite books of all time. If you get the chance, please buy a copy (not the abridged version), settle down in the garden, and read it. Anne with an E (a series streaming on Netflix) is also well worth a visit. Anne of Green Gables is a 1908 novel by Canadian author Lucy Maud Montgomery. Written for all ages, it has been considered a classic children’s novel since the mid-twentieth century. Anne is an orphan and a dreamer who has a very vivid imagination and an absolute love for nature. Obviously, I wasn’t around when it was first published (honest) but I discovered it when I was about 10 years old and have loved it ever since. Anne’s musings in the novel about nature and the world around her are truly magical and beautiful. Here are a few words of wisdom from the novel, which still ring true today – over 100 years later: 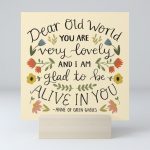 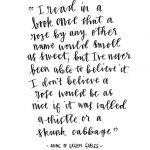 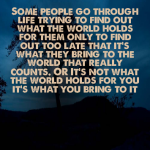 Anyway, please get a copy – your mums may even have one stowed away somewhere – ask them. I know you will enjoy reading about Anne’s adventures. She was the Greta Thunberg of her day – she loved nature above all else just as Greta does. I think Greta is wonderful – she is passionate about the dangers of ignoring climate change and determined to change things for the better by making us adults listen to the wisdom of you children (because you are the future and you are wise!)

Anyway, it would not be a true Mrs Moore memo without me including a poem. I thought long and hard about which poem about childhood to share with you. However, after much careful and lengthy thought – and with Greta in mind – I remembered a poem by Charles Tennyson Turner from my childhood. The poem is about a little girl called Letty who is given a globe for her third birthday. The beauty of this object transfixes her even though she is only a little child. The poet describes how, when she recognises England, she raises ‘a joyous cry’. This poem is dedicated to Mrs Cassell as we all know how much she loves Geography and how passionate she is about her subject. I’m also, on this International Children’s Day, dedicating it to all you wonderful children because, in the words of Kipling’s famous poem, ‘If’ – ‘Yours is the Earth and everything that’s in it’

WHEN Letty had scarce passed her third glad year,
And her young, artless words began to flow,
One day we gave the child a colored sphere
Of the wide earth, that she might mark and know,
By tint and outline, all its sea and land. 5
She patted all the world; old empires peeped
Between her baby fingers; her soft hand
Was welcome at all frontiers. How she leaped,
And laughed and prattled in her world-wide bliss;
But when we turned her sweet unlearnèd eye 10
On our own isle, she raised a joyous cry,
“Oh! yes, I see it, Letty’s home is there!”
And, while she hid all England with a kiss,
Bright over Europe fell her golden hair!

I look forward to speaking to you all again soon and to seeing you in my next assembly (L5-L6), but in the meantime, remember as always how very special you all are. Remember to be kind to each other and to yourselves. You are brave, you are strong so reach for the stars and let no one steal your dreams. The future belongs to you.
Love and best wishes