Welcome to the new week and Ramadan Mubarak to our Muslim families!

I know that you are continuing to work hard in lessons and I hope that you are enjoying your interactive zoom lessons and form time.  Over the next few days and weeks, you will be having more and more of your lessons via Zoom as I know this method of learning appeals to many of you.  I’m certainly enjoying keeping in touch with your teachers and finding out how you are getting on (you know how nosey I am) via Zoom and  I am very proud and pleased to be learning these new IT skills. 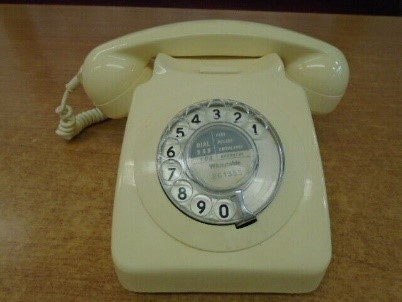 With new technology in mind, I was thinking yesterday of how far technology has come since I was a young girl.  Obviously, there were no computers and no mobile phones in my day – in fact, you were considered really posh if you had the luxury of even having a landline phone at home.  I will always remember when I was a child growing up in Northern Ireland that wonderful day when we finally joined the ranks of phone owners!   I can still see that phone now (in fact, you’ll think I’m slightly weird, but I still have one like it in my sitting room – it no longer works, but I love it anyway). Our first phone was absolutely beautiful – I still remember our telephone number too – Belfast 78303.  Years later as a young girl working in London (and very homesick) I used to think how wonderful it would be if I could ring that number and be able to connect to my younger self.    In fact, I’m thinking of writing a children’s story based on the idea of a magic phone – anyway, here’s a picture of it:

It made a very loud, but beautiful ringing noise on the very rare occasions that it actually rang!  Do NOT try this at home, but we children were very naughty and we used to dial 100 (the operator’s number) and say ‘Is that the operator on the line?’ When she answered ‘Yes’, we would shout ‘Well get off, there’s a train coming!’ and hang up.  My mum caught us doing this once and we were in big trouble – no Dr Who that weekend!

People in our road would often knock the door and ask to use our phone and my mum used to take great pride in inviting them in to sit at our lovely phone table and make their calls.  Joking aside, it was a really useful thing to have and we very quickly began to wonder how we ever lived without it.  Before I move on, another thing you could do in those days was dial the ‘speaking clock’ (if you were bored – which I often was as a child).  A lady (who sounded very posh, like the Queen), would say (for example) ‘at the first stroke it will be 10:22 precisely!’ There were little bleeps prior to her announcing the time.

You know how I love history – so here are some facts from The History Press about the speaking clock for you:

‘The first voice of the Speaking Clock was London telephonist Ethel (also known as Jane) Cain who was selected from a pool of 15,000 telephone operators who worked for the GPO in a nationwide competition to find the ‘golden voice’. One of the judges was none other than poet laureate John Masefield (who wrote ‘Sea Fever’ – see my last memo).  Ethel was awarded the princely sum of 10 Guineas (the equivalent of £10.50 today) for her work. Both the service and Miss Cain became an instant hit – people wanting to know the time were no longer clogging up the telephone lines calling just to ask the operator the time and Cain’s crisp pronunciation, particularly of the word ‘precisely’ (used at the start of each new minute), proved popular. In its first year of operation the service logged around 13 million calls, that’s over 35,000 a day!’ 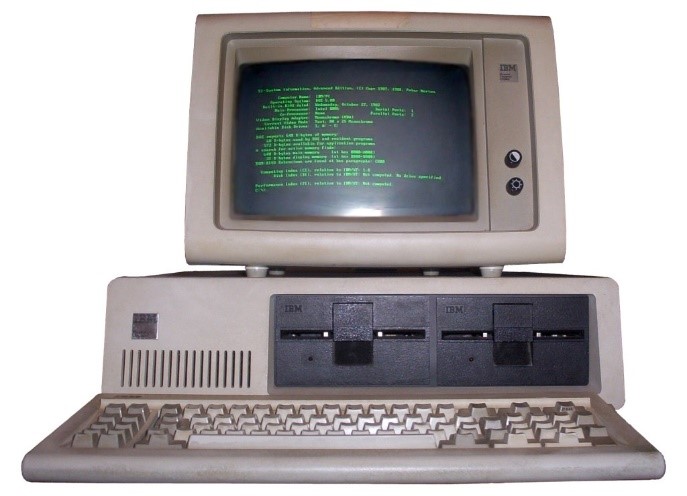 When I first used a computer back in the olden days, it looked very much like this (Mr Sneary will remember these too):

You had things called ‘floppy discs’ which you stored your documents on and the only option for text option was black and white!  It used to take what seemed like days to upload information and there was no such thing as the internet then either!  How things have changed – just look at this early 1980s mobile 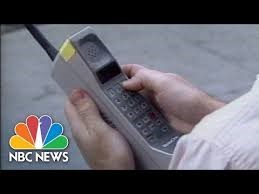 Imagine trying to hide that in your pocket during registration? (just saying!).  I remember my cousin getting his first mobile phone back in the days when only very important and/or rich people could have one.  He was really excited about getting it, but soon found that he didn’t actually  know anyone else who had one so he couldn’t really use it!

I wonder what children in the future will think of our Apple IPhones – I bet, judging by how quickly technology and communication has evolved since the 80s, that you will be able create holograms of each other and actually travel through time and space to appear as a hologram in the same room/country/universe as your nearest and dearest! Something like these perhaps: 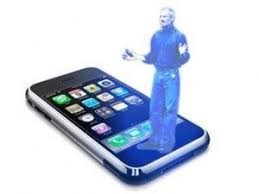 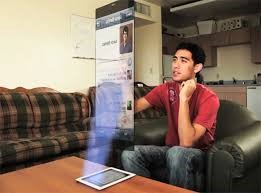 I love thinking about the future and imagining how different things will be then.  I also, as you know, love history and learning about how our ancestors lived.  Here are some facts about today:

Some important historical events which occurred in the final 10 days of April through the years:

22 April 1838 – The first steamship to cross the Atlantic, the British ship Sirius, arrived at New York; it made the crossing in 18 days.

23 April 1616 – The death of William Shakespeare, playwright and poet, aged 52. He leaves behind a wife, Anne, two daughters, Judith and Susanna as well as a wealth of literary treasures.

24 April 1858 – At the second attempt, the biggest bell in the world, Big Ben, is finally ready for hanging in the clock tower of Westminster Palace, London.

25 April 1915 – In World War I, over 70,000 Australian, New Zealand and British troops met fierce resistance from Turkish forces as they landed at Gallipoli.

27 April 1828 – The Zoological Society of London opened a zoological gardens in Regent’s Park.

29 April 1884 – Oxford University agreed to admit female students to examinations (Yay – at last!). However, woman are not to be awarded degrees (L)

30 April 1945 – In his hideaway bunker in Berlin, Adolf Hitler shoots himself.

Talking about history, we are living through a time that will form part of our history– something that you can talk to your grandchildren about one day when they ask ‘what was life like during lockdown?’   Here’s a little poem that I found about lockdown: 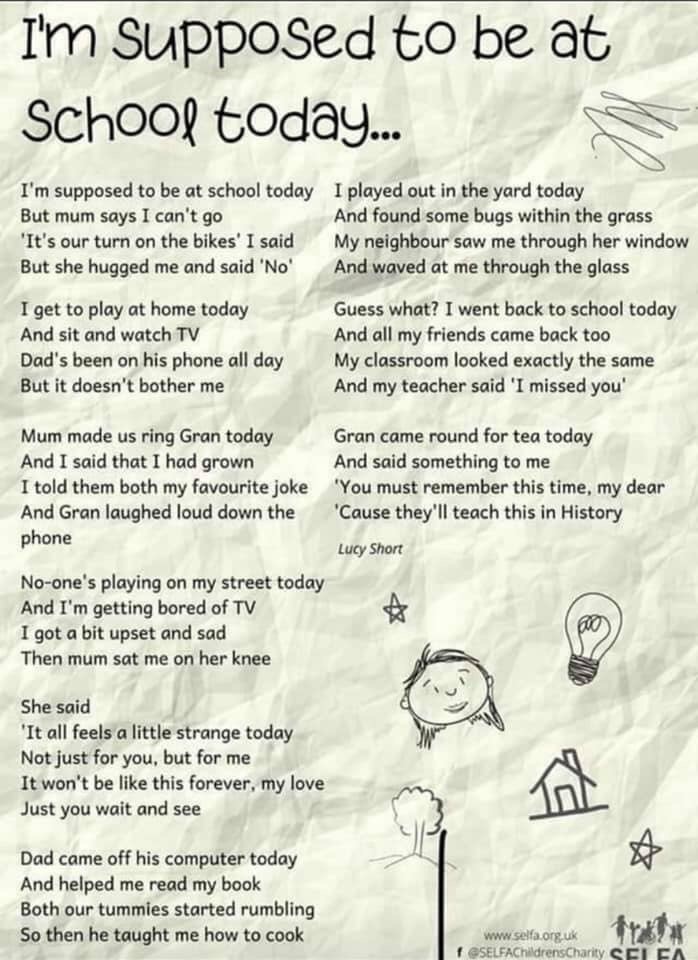 I know this is aimed at younger children, but perhaps you could write your own lockdown poem and send it to me?  I’ll be happy to award house points and publish them on our website if you do.

Finally, I hope you are all staying happy and positive and remembering to be kind to yourselves and to each other?  This is quite a difficult time for us all, but I know that you youngsters will be missing your friends and families – and, I hope your teachers and school.  We all miss you terribly (me especially) – so carry on working hard, improving your knowledge and baking those cakes!

Here are some suggestions for looking after your health and wellbeing: 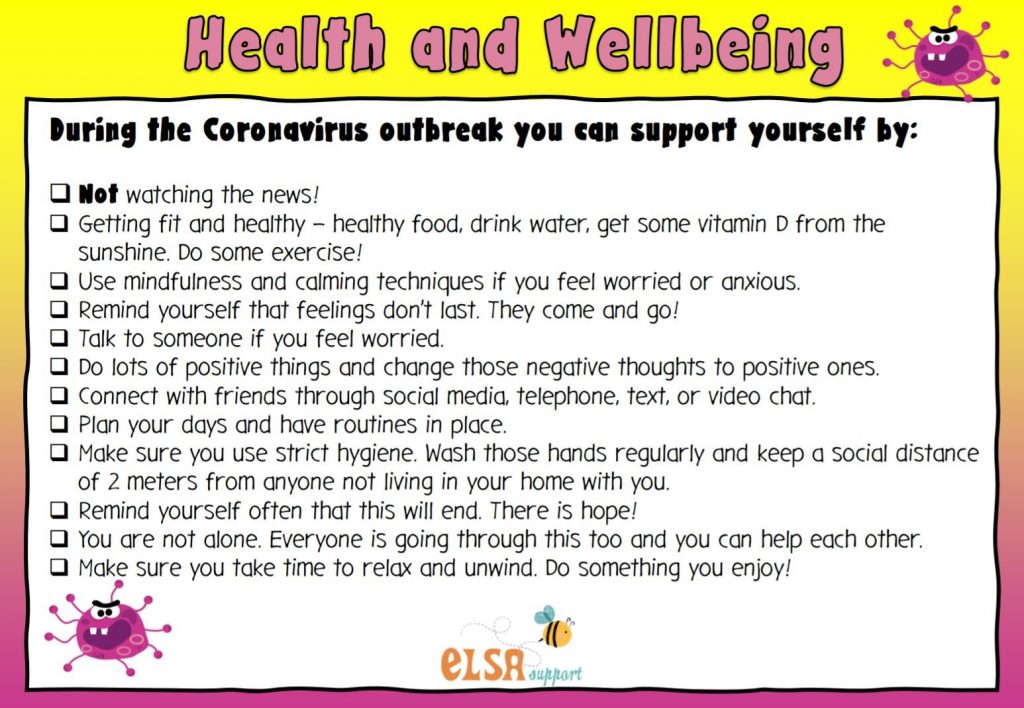 Keep in touch and let me know how you are doing.