I’m writing this (final) memo (for now) in my office at the Abbey as I’ve been working from School all week. It’s beautiful here – especially the gardens – and it’s so lovely to have had that lovely weather at the weekend as our daffodils are certainly doing well and about to burst into full glory anytime soon! Talking about daffodils, it was St David’s day on Monday and as the daffodil is the national flower of Wales and worn with pride on this special day, I thought I would focus on many things Welsh (including daffodils) in this memo in order to pay homage to my Welsh heritage and to let you have some information that you might find interesting!

Obviously, I can’t (being an English teacher and being as fond of poetry as you know I am, dear children), allow the mention of daffodils to go by without referring to that wonderful poet, William Wordsworth, who wrote so eloquently about the beautiful daffodils he admired on a springtime walk near his home in the Lake District. I say ‘walk’, but did you know that William was not one (unlike me and dear Mr Moore) to go on short sojourns (look it up) into his local park? Oh no – he was well-known for taking mammoth walks and It is estimated that he walked over 175,000 miles in his lifetime, often climbing Helvellyn too (a very high mountain in the Lake District of 50m)!  Wordsworth’s sister, Dorothy, who lived with him and often accompanied him on his daily jaunts wrote in her journal on 3rd September 1800, how William left “after breakfast” to walk “upon Helvellyn” and records later that he returned home at 10 at night, having covered probably 15 to 20 miles –a long, but not unusually long walk for him. Now that’s what I call walking!

Anyway, in true Mrs Moore fashion, see the next page for a copy of his beautiful poem ‘The Daffodils’. Wordsworth writes from the perspective of old age and looks back on a time when he was overwhelmed whilst out on one of his walks by the sight of a ‘host of golden daffodils’ (a host means ‘a multitude’ btw in case you were wondering!) I once saw a sign outside a florist’s shop in Windermere which proclaimed:

Here are some interesting facts about daffodils:

We get the word ‘Narcissus’ from Greek mythology. A nymph called Echo fell in love with a young Greek named Narcissus, but Narcissus told her to leave him alone. Heartbroken, she lived alone until nothing but an echo of her remained. Nemesis, the God of revenge, heard the story and lured Narcissus to a pool. Narcissus, who was very handsome and quite taken with himself, saw his reflection in the pool and, as he leaned over to see better, fell in and drowned. He turned into the flower.

Anyway, I mentioned Dorothy Wordsworth’s journal briefly above, but many critics (including me) would argue that it was she who inspired this famous poem because of this excerpt from her journal – what do you think?

‘ I never saw daffodils so beautiful. They grew about the mossy stones about and about them, some rested their heads upon these stones as on a pillow for weariness and the rest tossed and reeled and danced and seemed as if they verily laughed with the wind that blew upon them over the lake.’ (Dorothy Wordsworth)

There is also a very funny poem entitled ‘Why Dorothy Wordsworth is Not as famous as her brother’ (a party piece of mine btw). I’ve added a copy after William’s poem below for your information. In it the poet, Lynn Peters, imagines Dorothy trying her very best to compose the poem, but unable to do so because of the constant interruptions of her demanding brother!

“I wandered lonely as a…

They’re in the top drawer, William,

I wandered lonely as a –

No not that drawer, the top one.

I wandered by myself –

Well wear the ones you can find!

No, don’t get overwrought my dear, I’m coming.

“I wandered lonely as a –

Lonely as a cloud when –

As a cloud which floats –

Just hold on will you –

“One day I was out for a walk

When I saw this flock –

It can’t be too hard, it had three minutes.

Well put some butter in it. –

This host of golden daffodils

As I was out for a stroll one –

“Oh you fancy a stroll, do you?

It’s on the peg. Under your hat.

I’ll bring my pad, shall I, in case

You want to jot something down?”

Btw, dear children, I was delighted this morning to be presented with a lovely bunch of daffodils by our very own very dear Mrs Lightfoot! They are now in a vase on my desk and have really cheered me up. So ‘Diolch yn fawr’ (Welsh for ‘thank you’) Mrs Lightfoot!

Anyway, back to St David’s day and the Welsh. As you know from my numerous memos, my dad was Welsh and we were very privileged as children to be able to spend many of our long summer holidays from school in Wales. My Nanna, (she of the wonderful red poetry book fame) always cooked our Welsh favourites when we stayed with them and my mouth waters even now when I think about her Teisin Lap (English translation ‘cake on a plate’) (a gorgeous fruit cake which is enjoyed on St David’s Day – and at any time really) and her famous Welsh cakes. Nanna had the tiniest of kitchens, but it was spic and span and cosy as it always had a small fire burning in the grate.   I don’t know how she managed it, but Nanna was able to produce these delights in such a small space and at lightning speed. These yummy little cakes are cooked on top of the stove rather than in the oven and take only minutes to prepare and even less time to devour!! Btw, one of my most treasured possessions is the little iron griddle that she used for cooking her Welsh cakes on. 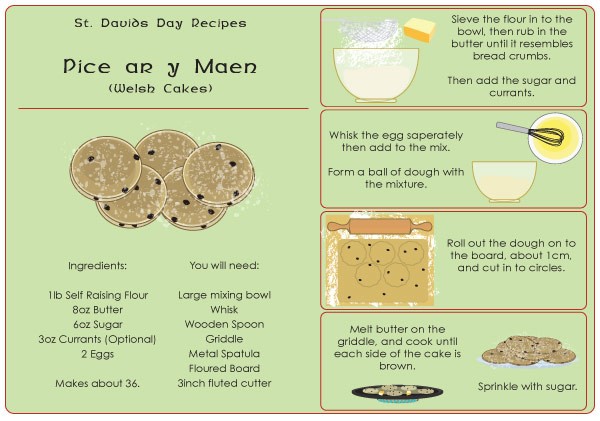 See if you can bake some for your mum on Sunday week (14th March)– (that Sunday is a special day for mums in case you need reminding!) I guarantee you will all love them!

Did you know that, as well as having the daffodil as their national emblem, the Welsh also have the leek? Now, you may wonder how this has come about as leeks can be quite smelly and I can’t envisage wearing one in my lapel in the same way as I would wear a daffodil. However, some facts about why leeks are linked to St David’s Day and the Welsh:

If I may say so, your Majesty, your famous grandfather and your great-uncle Edward, the Black Prince of Wales—or so I’ve read in the history books—fought a very brave battle here in France.

Your Majesty says very true. If your Majesties is remembered of it, the Welshmen did good service in a garden where leeks did grow, wearing leeks in their Monmouth caps, which, your Majesty know, to this hour is an honorable badge of the service. And I do believe your Majesty takes no scorn to wear the leek upon Saint Tavy’s day.

I wear it for a memorable honour;
For I am Welsh, you know, good countryman.

All the water in Wye cannot wash your majesty’s
Welsh plood out of your pody, I can tell you that:
God pless it and preserve it, as long as it pleases
his grace, and his majesty too!

Method
Melt the butter in a large saucepan over medium heat. Add the leeks and onion and cook without browning until soft, about 7 to 10 minutes.

Before finishing this memo, I need to say something about that important day that I mentioned earlier, which is coming up on Sunday 14th – yes, I’m talking about MOTHERS’ DAY!!

Mothers’ day is traditionally the day when we show love, gratitude and appreciation to all wonderful mums everywhere through little acts of kindness and the giving of cards and/or gifts. Mothers’ day celebrations go back as far as the ancient Greeks who celebrated Rhea, the mother of the gods, every spring with festivals and feasting. Also known as ‘Mothering Sunday’, the day has been celebrated in the UK and Ireland since the 16C and used to be a religious occasion when, on the fourth Sunday of Lent, people would visit their ‘mother’ church to give thanks to the Virgin Mary, the mother of Jesus. These gatherings united families and gave young girls and boys who were domestic servants in the big houses of the 19C, the day off to visit their families and see their mothers.

So boys and girls, make a big fuss of your mums, grandmas, aunties on Sunday 14th. Here is a little poem that you might want to give to your mum on that special day:

A Mother loves right from the start.
She holds her baby close to her heart.
The bond that grows will never falter.
Her love is so strong it will never alter.
A Mother gives never ending Love.
She never feels that she has given enough.
For you she will always do her best.
Constantly working, there’s no time to rest.
A Mother is there when things go wrong.
A hug and a kiss to help us along.
Always there when we need her near.
Gently wipes our eyes when we shed a tear.
So on this day shower your Mother with Love.
Gifts and presents are nice but that is not enough.
Give your Mother a day to have some peace of mind.
Be gentle, be good, be helpful, be kind.
Happy Mothers Day.

Definition of the word ‘mother’:

‘Mother – noun. A person with the ability to detect a lie, hear the smallest noises and see out of the back of her head.’

I simply cannot wait to see you all in School next week! We have missed you so much and I want you to know that your teachers are here to support you and to ensure that your transition back into ‘real school’ is as smooth as possible.   I know many of you may be feeling a little anxious about coming back into School and in order to help you with this, Young Minds have put together lots of useful information on their website which might help entitled ‘Coping with anxiety about going back to school’ which includes advice on:

Click on the link below to navigate to this information.

Birthday greetings for to those of you with birthdays in the month of March (don’t forget to wear your daffodils):

It only remains for me to remind you that you are special, you are loved and as always, remember that : 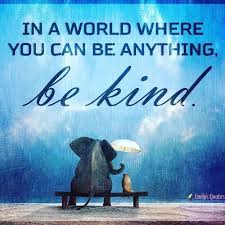