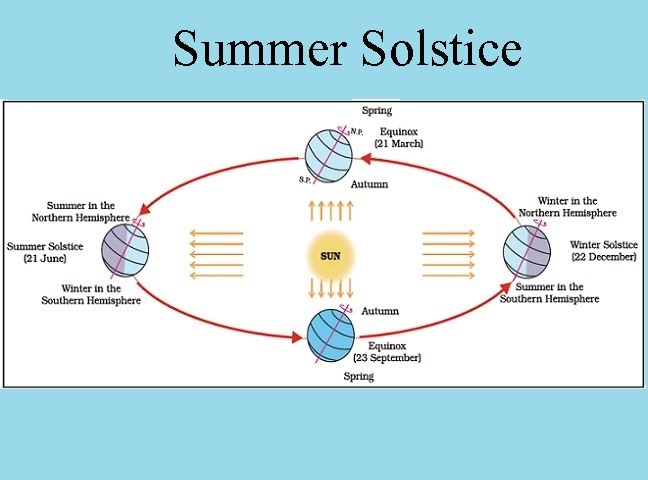 I hope you all had a lovely weekend and enjoyed the improved weather. Yesterday, 21st June marked the date of the summer – otherwise known as the estival solstice, midsummer or Litha – and the longest day (and shortest night) of the year. It occurs when the earth’s geographical pole becomes most inclined towards the sun and officially marks the beginning of summer – yay! I must admit, it did not seem any longer to me as we were travelling back from a day trip to the wilds of Yorkshire and I did not notice any great change. However, it has been wonderful to see the sun come out stronger today and it promises to get even hotter as the week progresses, so summer may really be here!

Thinking of the summer solstice and the longest day takes me right back to my school days and listening to dear old Miss McElroy (our Geography teacher) droning on about the wonders of the universe. She was a wonderful, if slightly eccentric teacher, and once lost us all on a trip to the Mourne Mountains in Northern Ireland – there was no such thing as health and safety or risk assessments in those days, children. Don’t worry though as we were eventually found safe and well and had an amazing time in the interim discovering caves and abandoned cottages and generally having a ball. Poor Miss McElroy was beside herself though for the 30 minutes or so when we were missing. This poem always reminds me of her, but unlike the teacher in Brian Patten’s poem, Miss McElroy did travel widely and enjoyed every minute of her well-earned retirement (I know this because we used to keep in touch):
Geography Lesson by Brian Patten
Our teacher told us one day he would leave
And sail across a warm blue sea
To places he had only known from maps,
And all his life had longed to be.
The house he lived in was narrow and grey
But in his mind’s eye he could see
Sweet-scented jasmine clinging to the walls,
And green leaves burning on an orange tree.
He spoke of the lands he longed to visit,
Where it was never drab or cold.
I couldn’t understand why he never left,
And shook off the school’s stranglehold.
Then halfway through his final term
He took ill and never returned,
And he never got to that place on the map
Where the green leaves of the orange trees burned.
The maps were redrawn on the classroom wall;
His name was forgotten, it faded away.
But a lesson he never knew he taught
Is with me to this day.
I travel to where the green leaves burn
To where the ocean’s glass-clear and blue,
To all those places my teacher taught me to love
But which he never knew.
I hope you get the chance to travel widely when you grow up because there is nothing as wonderful as discovering new lands – I certainly aim to get in as many air miles as possible once lockdown ends and when I eventually retire.
I have always been captivated by tales of foreign lands and places and have longed to have enough money and time to go on a grand world tour. Two of the places I’d love to visit are Egypt, as I’d love to see the pyramids and take a cruise down the river Nile, and the Holy Land. I think my desire to travel to the Holy Land was probably inspired by a poem we had to learn by heart for an English assignment back in the dark ages of my youth. It is called ‘The Destruction of Sennacharib’ and was written by one of my all-time favourite Romantic poets, Lord Byron. First published in 1815, it is based on the biblical account of the historical Assyrian siege of Jerusalem in 701 BC by Assyrian king Sennacherib, as described in the Bible. It filled me with awe and wonder and I could really hear and picture the sound of the marching army and the galloping horses as they approached and destroyed Sennacharib and its people. It certainly made a change from the soppy poems we usually had to learn such as Wordsworth’s ‘I Wandered Lonely as a Cloud’ (sorry Wordsworth). 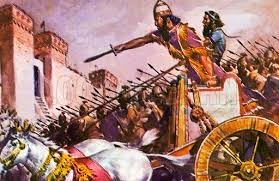 The Destruction of Sennacherib (1815) George Gordon Byron
The Assyrian came down like the wolf on the fold,
And his cohorts were gleaming in purple and gold;
And the sheen of their spears was like stars on the sea,
When the blue wave rolls nightly on deep Galilee.
Like the leaves of the forest when Summer is green,
That host with their banners at sunset were seen:
Like the leaves of the forest when Autumn hath blown,
That host on the morrow lay withered and strown.
For the Angel of Death spread his wings on the blast,
And breathed in the face of the foe as he passed;
And the eyes of the sleepers waxed deadly and chill,
And their hearts but once heaved, and for ever grew still.
And there lay the steed with his nostril all wide,
But through it there rolled not the breath of his pride:
And the foam of his gasping lay white on the turf,
And cold as the spray of the rock-beating surf.
And there lay the rider distorted and pale,
With the dew on his brow and the rust on his mail;
And the tents were all silent, the banners alone,
The lances unlifted, the trumpet unblown.
And the widows of Ashur are loud in their wail,
And the idols are broke in the temple of Baal;
And the might of the Gentile, unsmote by the sword,
Hath melted like snow in the glance of the Lord!
Poor Mr Moore had to put up with me reciting this as we walked across the wilds of the Yorkshire Moors over the weekend. Yes, I can still remember every word and still love this poem because of the imagery that Byron uses to really bring the story alive. Unlike artists who use paint to portray beauty, Poets rely on their ability to use figurative language to portray the imagery they wish to create and no one does this better than Lord Byron in my opinion.
When we were on one of our lovely long walks in Sutton Park recently, I saw the most amazing bird of prey. It had a huge wingspan and soared above the forest canopy sending other smaller birds into a frenzy of fear. It looked so absolutely beautiful and peaceful as it caught the thermals and floated majestically above the trees that it made me wish I could fly too. This in turn led me to remember a poem that I loved as a young girl, called ‘High Flight’, which was composed by Pilot Officer John Magee in 1941 during the 2nd World War. John enclosed the poem in a letter to his parents, dated 3 September 1941. Sadly on 11 December 1941, in his tenth week of active service, Magee was killed while flying his Spitfire on active duty over France. He was only 19 years old, but his poem conjures up his absolutely love of flying and his love of life. He was an American airman, but here in England – in Lincolnshire, the county in which he was stationed during the war. 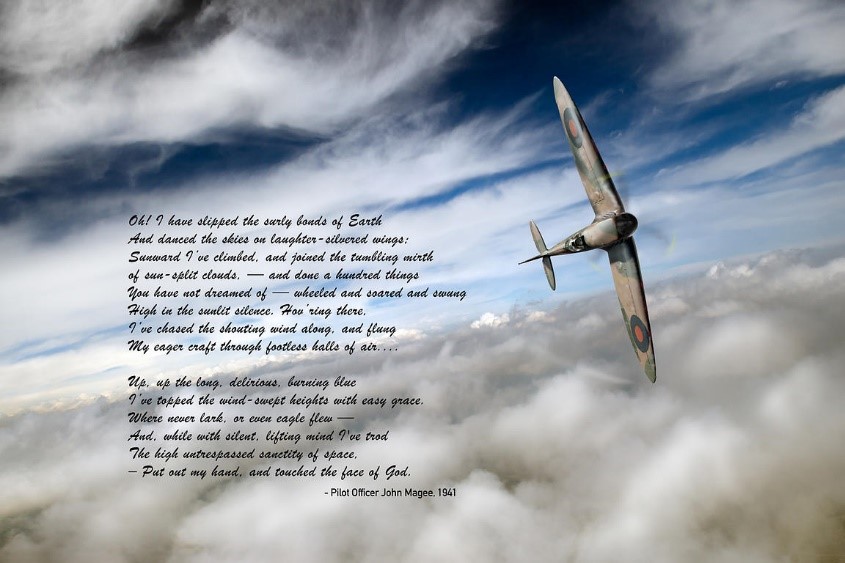 The poem fills me with awe and really conjures up the love of flying that the young John Magee experienced during his short life.
You will, no doubt, have noticed that this memo contains more poetry than normal. I put this down to the fact that summer always makes me more poetically minded – I simply cannot help it! I suppose it is also because the warmer weather and the beauty of nature has the ability to make us all more creative and poetic! I would love to receive any poems that you might have been inspired to write during these long weeks of lockdown, so please don’t be shy and send them to me.
Another hobby I had as a child was fishing. During the long summer holidays in Ireland, my little brother and me used to pack a few sandwiches and a bottle of pop and head off to the harbour to fish. We would be gone all day and didn’t catch much. However, we loved the adventure of casting our lines out to sea and waiting for a catch. Fishing is a hobby that I am really looking forward to taking up again this summer and I can’t wait to get down to the sea again.
Oliver R in U3R also loves fishing and has sent me in this picture of his latest catch: 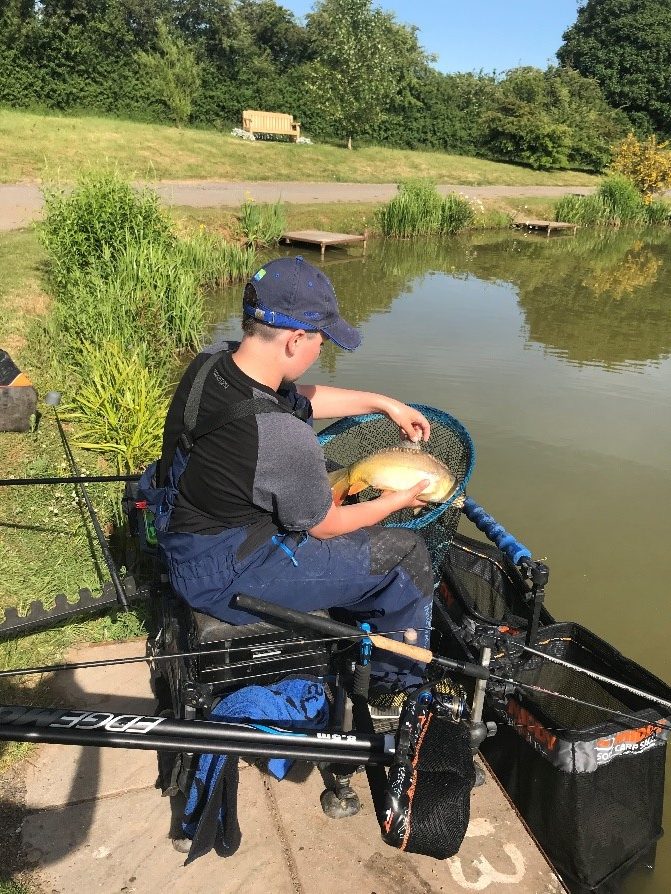 Oliver also had a picture and story published in Angling Times – see below: 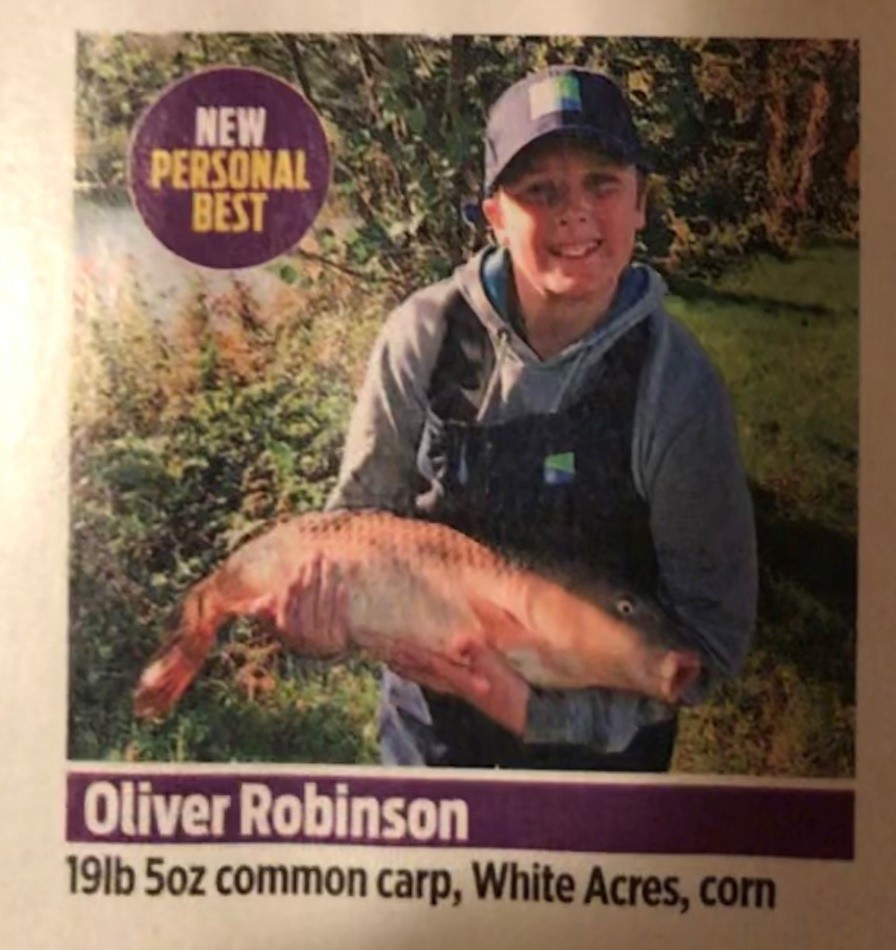 Wow!! How simply fabulous! Well done, Oliver – please let me have some tips!
Please don’t forget to let me have any news and/or photos that you would like me to see and showcase in my memos and on the School social media pages. We all have a talent for something, so please let’s celebrate our successes.
Birthday greetings go to Muhammed-Ibrahim Hussain who turns 13 today (Tuesday 23rd June) – Have a great day!

Before I forget, Mr Linfield has asked me to remind you about Virtual House Sports Day, which is due to take place on Tuesday and Wednesday 7th, and 8th July – watch this space!
Well, I’ve run out of things to say for now, but I’ll be back on Friday with more poems – ‘Oh No!’ I hear you cry!

Until then, remember how special, talented and wonderful you all are. Have faith in yourself and always remember to be kind. The most important thing to remember during this crisis is how kind we all became – ‘when fate was cruel, we were kind’. Remember this especially when using social media – never say anything cruel or hurtful and never, ever use inappropriate language. 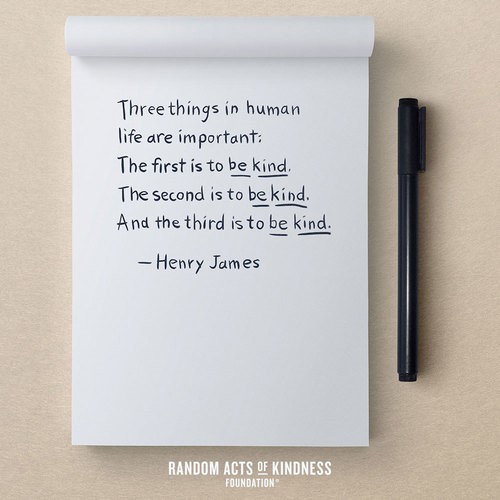