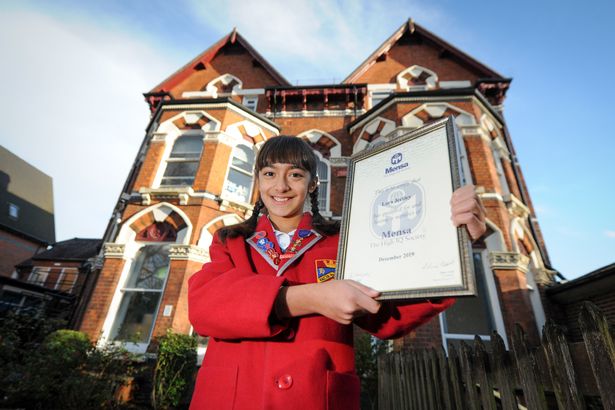 Fantastic to celebrate with Highclare Preparatory School Pupil, Lara Jeetly as she is accepted in to Mensa with a score of 162 on on the Cattell III B scale, two ahead of both Albert Einstein, famed for his theory of relativity and theoretical physicist, Stephen Hawking! 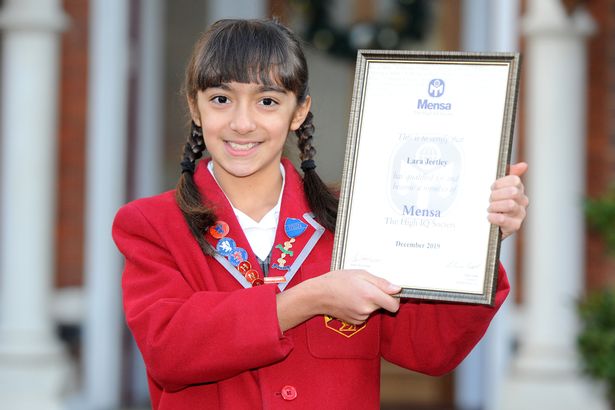 A super smart Sutton Coldfield schoolgirl has proved she is brainier than Albert Einstein after being encouraged by her school to explore ways of extending her learning.

Lara Jeetly from Little Aston has received a top IQ score after taking a Mensa test in a room full of adults who she said were all saying how tough it was!

Lara’s mum was told by Highclare School that her daughter may benefit from joining the high IQ society, after excelling with the learning material they had to offer.

Lara took the test one week before her 11 birthday and scored 162 on the Cattell III B scale, two ahead of both Albert Einstein, famed for his theory of relativity and theoretical physicist, Stephen Hawking!

Lara is ‘not a typical studious child’ according to her mum and rather than being a geek she loves the outdoors. She also has a love for looking after the planet and animals and takes part in a lot of local projects to protect hedgehogs and birds and to reduce the use of plastics.

And she has already put her intelligence to good use taking part in two hackathons – finding out about computer programming and even set up businesses selling slime – Lara’s Slime Shop and toys – MyLittlePonyEverything.com, aged just nine (both have been closed down, for Lara to concentrate on her studies).

Lara’s mum, Jess, said: “At the age of six we were very worried to find her lying in bed awake at night and she would tell us she couldn’t get maths sums out of her head.  Lara has always been curious and wanted to know how to program computers.

“She is an only child. We didn’t know anything about Mensa. A teacher said, at the start of term, we have taught her as much as we can teach her about maths. We have gone to Year 8 level for 13-year-olds.

“She was losing interest in lessons and they suggested taking her for the Mensa test to join the society. She took the test at the end of October and we got the result last week that she is in the top one per cent of the population for intelligence.

“We were shocked. She is a Mensa member now. The main thing is there are lots of support groups and special interest groups with Mensa in Birmingham, Wolverhampton and Coventry.

“We said you can do whatever you like to do!

The now 11-year-old told BirminghamLive: “My mum took me in a room for the Mensa test and I was quite surprised as we had come late and the whole room was full of adults in their 30s and 40s.

“They found it quite hard as I heard them whispering to each other saying the test was quite difficult and they couldn’t complete it.

“There were two papers – one on verbal reasoning and one on English. The first one was easy, like my 11-plus exam, the second one was a little bit harder.

“I didn’t know much about IQ levels – but my family started talking about it more and thought it was a big achievement.”

Lara would like to put her brainy powers to good use and said: “I want to make a difference to the planet. There’s lots of CO2 in the air and I’d like to make a better environment by creating an invention or something else that helps with that.

“I am thinking of creating flying car as there’s lots of traffic, as well as electric cars that are fast and more safe, such as autonomous cars.

“I’m quite excited. I like interior designing and building things and watch Grand Designs and The World’s Most Extraordinary Homes. I also like computers and programming, especially artificial intelligence.”

Lara’s teachers always knew she was bright as she achieved distinctions in her piano grade 5 exam and her grade 3 LAMDA public speaking exams at a very young age and has been academic prize winner each year. Not only did she achieve one of the highest scores in the 11 plus grammar exam, but she has also received two scholarships from the top independent secondary schools in the region.

Polly Bennett, head of Highclare Preparatory School, said: “From a young age Lara has demonstrated an enthusiastic love of learning, a curious mind that embraces all of school life. Lara is a vibrant member of our school community, we are very proud of her achievement and we look forward to celebrating all of the opportunities and successes the future holds for her.”